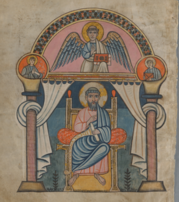 Download the latest tar file from the Apache site, and upload it onto the machine that will be running James.

Make sure your firewall allows the email ports.
Extract the tar file.
Go to the $JAMES_HOME/bin directory.

You may have to change permissions on a few of the shell scripts to get James to run.

Let it go for a few minutes.
Then run

After this, you must make some changes to the default James configuration file that was generated in $JAMES_HOME/apps/james/SAR-INF/config.xml. I will cover this in a future post.
Updated:

Image from Codex Aureus, an eighth-century Southumbrian manuscript housed in the National Library of Sweden. Image from World Document Library, assumed allowed under Fair Use.