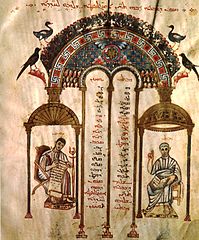 Image from Wikimedia, assumed allowed under Fair Use. Image from the Rabbula Gospels, a 6th century Syriac Gospel manuscript.